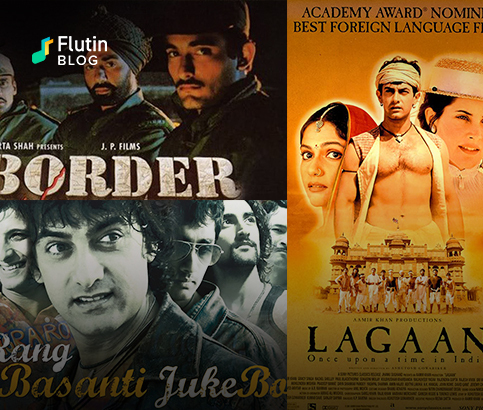 Movies and music hold the power to evoke all kinds of feelings in you. A thoughtfully crafted movie and a well produced song with articulate lyrics can move you to exhibit emotions that align with them, even if you don’t intend to. Over the years, Bollywood has churned out brilliant Hindi patriotic movies and patriotic songs to pay tribute to our motherland as well as our real-life heroes at the borders. This 15th August, let’s shower our love for our country with these sensational Independence Day songs and movies.

Bollywood is famous for its insanely catchy party tracks, moving romantic tales and mainstream masala movies. However, a comparatively underrated side of Indian cinema lies in its artistry to invoke deep nationalistic emotions within the masses with beautiful Hindi patriotic movies and patriotic songs. Gear up for this 15th August with the best Independence Day songs and movies to pay your respects for the nation as well as its unsung heroes.

Based on the truth events of the Indian army’s retaliation of the attack on Uri (in Jammu and Kashmir), this film does justice to the valour and courage shown by our soldiers on a daily basis. Vicky Kaushal’s sensational performance never fails to fill our eyes with tears of pride for our nation.

Border is a classic Independence Day movie. In this one, Sunny Deol does a brilliant job of expressing the passion of India’s brave warriors towards our motherland.

Rang De Basanti is a beautiful modern twist on the tale of one of India’s immortal heroes – Bhagat Singh. Rooted around the lives of millennial college students of Delhi University, the movie showcases how a patriotic revolt would have been in the 21st Century.

The third Indian movie to receive an Oscar nomination is another timeless classic when it comes to patriotic movies. In fact, this was the movie that brought Ashutosh Gowariker the attention he deserved.

A.R. Rahman and Lata Mangeshkar joined hands to recreate the national song of the country with their own flavour to it. The tone of the song arouses a deep fiery passion towards our nation.

This is one of the latest additions to the list of Bollywood patriotic songs. The lyrics of the song will fill you with immense love for your country.

This track from the movie Kesari is another heartfelt rendition of the love and respect we have for our homeland. The deep lyrics coupled with the wonderful music is just the perfect mix for this Independence Day.

‘Bharat‘, from the movie Manikarnika, is an empowering song about the strong attraction and affection a person holds for their country. The song gives us a brief glimpse of how the Rani of Jhansi rose up against the oppression of the British.

Independence Day is the day for the country to come together in celebration of India’s victory to achieve freedom. It’s also a day to pay our tributes to the national heroes. This Independence Day, get your patriotic playlist on the Flutin app ready and spread your love for your country.