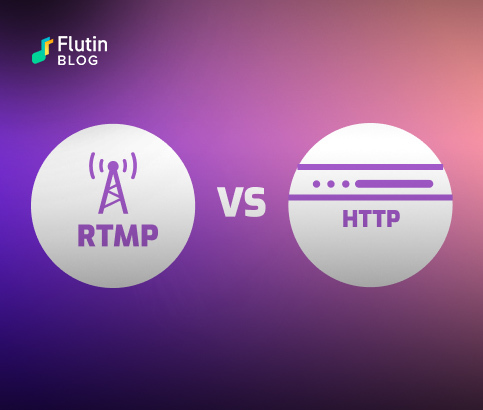 It’s no longer a secret that live streaming apps and platforms are currently on the rise due to the demand driven by both viewers and streamers. More and more streamers are finding their way in this booming industry to realize their dreams while doing the things they love and are good at. If you’re a beginner or thinking about starting your own streaming channel, one of the areas that must be bothering you is online video hosting. Which live streaming software to use? How to stream smoothly and effectively? Today, we discuss the two popular protocols – HTTP and RTMP streaming – and help you determine your ideal choice.

Smooth, stable and professional online video hosting is pivotal to the success of your streams. The more convenient it is for your viewers to watch your content, the more your streams are likely to draw in an increased number of people. In this context, you need to remember that smooth streaming is not only dependent on the live stream apps you choose to broadcast to. A key role in this aspect is played by the live streaming software you choose. Today, we take a look at the two most popular protocols – HTTP and RTMP streaming – and decide which option is the right way to go.

The Significance Of Streaming Protocols

Before we delve into the two above-mentioned protocols, it’s better to understand what exactly they are and what their purposes might be. To put it simply, live streaming protocols belong to the family of internet protocols which are nothing but a set of computer rules that break your content into chunks, send them from your device to your viewers’ devices, and reassemble them for the audience to see your broadcasts. The advancement of technology has made it possible for people to view content simultaneously as it’s broadcasted and this is where streaming protocols come in to ensure that it takes place smoothly.

Now that you know what streaming protocols are needed, let’s dive deeper into the two most popular types of software.

RTMP is the abbreviation for Real-time Messaging Protocol which has been developed by Macromedia (now under Adobe). It’s an incredibly famous streaming protocol that is supported by almost all the mega streaming platforms like YouTube, Twitch, etc. Long story short, it follows a standardized procedure of moving multimedia files between the encoder and the streaming platform.

As the name itself suggests, HTTP streaming (also known as HLS) is a streaming protocol that allows the transmission of audio and video over HTTP websites and servers. It must be noted here that this is an HTTP-based adaptive bitrate streaming protocol originally developed by Apple Inc. This data transfer technique enables the transmission of content from a web server to its recipients over one HTTP connection.

HTTP vs RTMP: The Ultimate Choice

Now that we have covered both types of protocols and you have a basic idea of what each of them involves, it’s time to come down to the big question – which do you choose?

It must be noted here that HTTP streaming is most commonly used for playback instead of live broadcasts. Therefore, they are more suited for progressive downloads rather than streaming directly. Also, when it comes to HTTP, some amount of intrinsic latency is inevitable.

On the other hand, RTMP streaming is the solution for actual streaming sessions. It is associated with incredibly low latency which results in extremely quick and stable broadcasts. And these high speeds are achieved without the need for downloading the content. So, if you’re looking to live stream your content and have viewers watch you at that very instant, RTMP is definitely the way to go.

Now, you do not need to look for an answer anymore. We have covered the basics as simply and as much in detail as we could. We hope we have cleared your queries regarding the two streaming protocols. If you wish to live stream via RTMP, you can seamlessly do so on the popular streaming platforms simultaneously via Flutin Live. But, are you wondering how exactly to do that? Click here for a detailed guide to RTMP streaming and how it works.