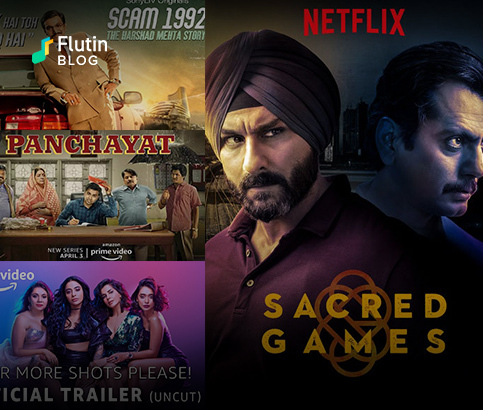 The Indian web series brought on some refreshing change on the Indian TV front. After the overly dramatic soap operas, these web series gave us a glimpse into how brilliant series can be created even in India. In fact, some of the best web series are highly ranked on platforms such as IMDb. However, for us desis whose life is incomplete without music, it’s the iconic theme songs that add the cherry on the top. Take a look at the best web series title sequences that elevate the essence of the shows.

While Indian web series were gradually beginning to be recognized for their amazing acting and fantastic plots, they blew up big time amidst the pandemic. People being quarantined at home began exploring the best web series sphere of Indian TV. And a key aspect that contributed to the soaring popularity of these web series was their title tracks. Check out our list of the most remarkable web series title sequences so far.

We had to begin our list with this iconic theme music. Composer Achint did an incredible job in heightening our thrill every time it was played at the beginning of each episode. It’s no wonder that, besides the content, even the theme track went viral on social media platforms.

The title score of Panchayat brilliantly captured the essence of the show’s breezy, rustic drama. The simple yet soothing intro score was impossible to skip by every time we dived into a new episode.

Four More Shots Please was all about breaking the stereotypical thought process of orthodox India to show that girls can and have the right to have fun and live vicariously. And the theme music will empower you with that exact feeling with its aura of distinct funkiness and quirkiness.

You cannot deny the fact that we all lost our minds after watching the two seasons of Sacred Games. Right from the beginning, we were hooked. And it was the title sequence that had us on the edge of our seat with every episode. Building up the hype and suspense of this crime thriller, it ideally combined the chaotic and thrilling vibe of the show.

Permanent Roommates gave us THE series about a couple that we were looking for. And the intro score is just as sweet as Tanya and Mikesh themselves. The calming whistles backed by rhythmic guitar tunes was the ideal beginning to such a heartwarming show.

Little Things is another show revolving around the lives of a young live-in couple and the challenges they face. While the series itself taught us a lot about relationships, it was the pleasant title score that would comfort our hearts at the beginning of each episode.

TVF’s Pitchers is one of the highest rated Indian web series on IMDb. Released in 2015, this 5 episode series about four wannabe entrepreneurs became a raging hit, especially among millennials. The theme song, The Relevant Song, is nothing short of a masterpiece from Vaibhav Bundhoo.

These were the web series title sequences that had the nation’s heart from the get-go. If you are someone who likes to enjoy all kinds of music, the Flutin app is the place to go crazy on the beats.