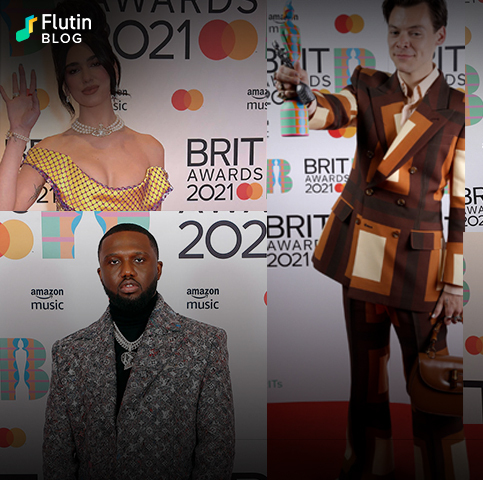 The Brit Awards 2021 was a highly anticipated event after the BAFTAs and the Oscars. And it didn’t disappoint. Taking place at the O2 Arena in London, the Brit Awards struck a chord with the viewers assuring us of a long lost hope for our return to normalcy. Besides, it was the night when women stole the spotlight as this year’s Brit Awards winners were mostly females. Check out the major highlights of one of the most prestigious nights of music.

Taking place on the night of 11th May, the Brit Awards 2021 was an event that was filled with jaw-dropping moments and cause for hope and celebrations. From stunning red carpet looks to deserving Brit Awards winners, the night was more extravagant and special for artists and viewers alike than one could imagine. Here are the key takeaways from this year’s Brit Awards.

Unlike the Oscars and the BAFTAs, the Brit Awards said no to not only virtual elements but also social distancing and wearing masks. As a part of the UK government’s testing scheme, the show was attended by 4,000 people. Of these, about 2,500 tickets were gifted to frontline workers of the area. Besides being more entertaining for viewers at home, the presence of the audience and the return to live music embarked the first step towards a normal world.

2. The Night Belonged to Dua Lipa

Dua Lipa took home two Brit Awards for the British Album as well as the British Female Solo Artist. Besides, she gave us a taste of her potential to pull off rocking concerts. As someone whose popstar fame peaked during the pandemic, the singer never got the chance to live the popstar life like going on mega arena tours or firing the big guns at award show performances. Well, now the latter is off her checklist as she delivered a powerful performance of a five-minute medley of her hit songs.

3. The Tribute to NHS Workers & Other COVID Warriors

The gesture of giving away free tickets to the key fighters of the pandemic was thoughtful. However, this isn’t enough. In her first acceptance speech, Dua Lipa rightly pointed out, “I think what we should do is we should all give a massive, massive round of applause and give Boris (Johnson) a message that we all support fair pay rise for our front line.” Other artists to raise the issue included Harry Styles and Taylor Swift while Rag’n’Bone Man and P!nk dedicated their performance to the healthcare workers.

Globally renowned girl groups such as Spice Girls and Girls Aloud never won the Brit Awards. In fact, no girl group had ever taken home a Brit Award, until the night of 11th May. Little Mix rewrote history by bagging the Brit Award for British Group. In their acceptance speech, the girls expressed their gratitude for former member Jesy Nelson along with the other girl groups to pave the way for them.

5. The Night of Surprises

The Brit Awards 2021 was undoubtedly dominated by women. A whopping 8 of the event’s 11 trophies had female artists’ names written on them including Dua Lipa, Taylor Swift, Billie Eilish and Little Mix. Swift was honoured with the Brit Award for Global Icon and gave viewers a pleasant surprise when she appeared to accept the award in person. Viewers were taken aback yet again when the former US First Lady Michelle Obama presented (remotely) the Brit Award for the Best International Male Solo Artist to The Weeknd.

The Brit Awards 2021 was truly a spectacular show that fired on all cylinders to live up to the anticipation. With such an incredible night etched in history, the Brit Awards 2022 surely needs to go all out to top this year’s exciting event filled with empowering moments. Check out all their songs on Flutin Music App.